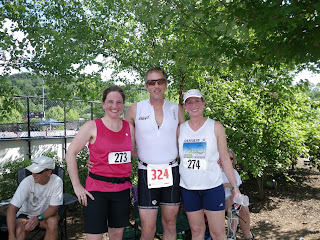 Well the birthday week ended just how it started. Overindulgence and excess. I was a far cry from prepared for my first 'A' race of the season but I towed the line anyway as I was really looking forward to this one.

The French Broad River Challenge has been a race just waiting to happen in Asheville, NC. A race that morphed from the old Riverlink Triathlon of days gone past and now part of the Mountain Sports Festival, the FBC was a showcase for the multi-sport scene that the festival was promoting. Starting at a very gentlemanly 5pm at the heart of the festival village, the race would be a 1.5 mile sprint from the velodrome to the French Broad River. From there, we would hop in kayaks and paddle downstream 2.5 miles. Next was a quick transfer to road bikes for an 11 mile time trial then back to running shoes for the final 3 mile run back to the festival and one last lap around the velodrome race track. It was a great venue and a prime time to bring out some tough competition and it didn't disappoint.

I really did have big plans to be in prime shape for this event. I knew there would be some good racers coming and I wanted to make sure I was at least in the game. Problem was it landed at the end of a busy race month and right in the middle of a 'birth-week' celebration. I lost a little focus and began enjoying the party before the work was done. I wouldn't say my pre-race week was a total washout but it certainly was not anything I would recommend.

I got to the race in plenty of time to set up my gear and transition areas. I tried to hang in the shade as much as possible and relax but with the festival energy and racers starting to mass, I needed something to do so I went to change clothes a little early. Good thing. As I was gathering the race kit, I noticed that I only had ONE shoe!!! Crap, I had dropped off a pair of shoes for the final run leg with my bike transition gear but I needed a pair for the first run and trek out of the water. I must have let a shoe drop out of the car during my gear placements. Running in my Inov8 Recolites, while super comfortable for after race wear, was not an option I wanted to deal with. So, back in the car I go to drive back to the bikes and pick up my RocLite 295's. Unfortunately, a 5K road race had just started on the route to my bike. This caused the police to shut down traffic. No problem, just a slight panic attack thinking I would now miss the start of my own race. 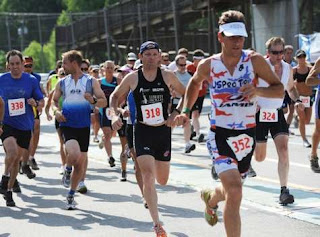 I made it back to the start in time to catch the pre-race meeting in the now very hot afternoon sun. Standing on the track waiting for the race to start, I was beginning to feel the rush and knew that all the beer and cake from the previous week made no difference right now. It was game on and there was no more time to worry. The race started straight away and very fast. Kevin Lisska and Jay Curwen began to set the heavy pace and I followed right behind. I kept thinking that it was only 1.5 miles. I just needed to hang on. Their pace was increasingly more than I could hold and soon fell back. I dug deep and finished the first run leg at a 5:50 pace but still found myself 30 seconds back in third place climbing into the boats.

The boat, Ahhhhh. I made a pretty quick transition and began to settle down for a section of the race that has always been very kind to me. I've been a long time paddler and had a speedy boat for the venue. It took a few minutes to catch up to Kevin and Jay as they were going very hard but I soon caught my rhythm and passed them by. These two are super strong riders and runners and I knew I needed to put the hammer down here. It was my only hope to keep them away from me. I did indeed put some time on them and came out of the water for the bike leg in first place. Unfortunately, former olympic paddler, Lecky Haller, was right on my tail. I had a bit of a brain fart looking for my bike. I lost a little mental focus and ran around trying to remember what my bike looked like amung all the bikes in the rack. During my little mouse maze test, Lecky hopped on his bike and headed out just in front of me. 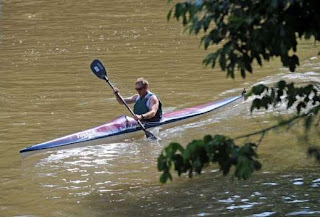 I've raced against Lecky many times. I win some, I lose some. With my current fitness, I didn't trust that I could let him go and wait to catch him in the final run. I got on the bike and settled into a pace to match his speed and waited for the blood to work its way into my legs. When I felt good enough, I went for it and passed him hard, hoping to drop him right there and be done with it. Just after that, I saw something flash past my left side. It was Jay streaming past me like a bullit. I looked down at my speedometer and was going 26 mph. He had to be going 35+ Incredible.... Now in second place, Lecky got a second wind and passed me as well. Because of drafting rules, I had to drop back 15 bike lengths before passing him back. Touble was, I was starting to doubt my fitness and didn't know if I could. I tried to wait it out but got a little nervous and made the pass back ahead of Lecky. A mile later, he rolled ahead of me again. He was definitely feeling good today and looked focused as he rolled on through. The course was an out and back, and at the turnaround, I was only a few seconds back in third place. I was still not feeling great so I was content to hang back. A few miles later, Kevin came flying past. Now in 4th place, I had to do something to stop the bleeding so I dug in and gave it one last effort. I was able to bridge the gap back upto Lecky and pass by him one more time. I made it back into the bike transition ahead of him and just 35 seconds back of Kevin in third place. Quickly changing shoes, I began the hot 'sprint' back to the finish. 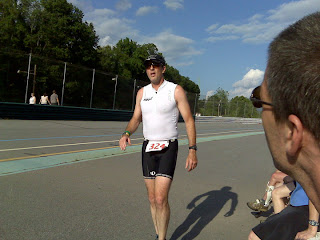 Switching from bike to run is always tough. Your legs just aren't ready to move in that rhythm right away. It always feels like you are in slow motion. Hopefully, if you are in good form, you begin to snap out of it in about a half mile and begin to feel like a runner again. This time, not so much. It was a HOT HOT road run and I just couldn't get my breathing under control. All that cranking and back and forth with Lecky had taken its toll. I tried to relax and just let it come but I kept looking back and waiting for the others to arrive. 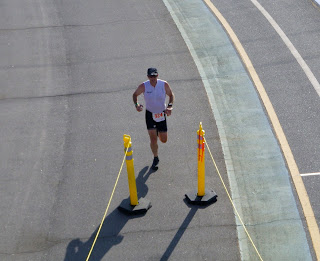 There were a few moments where I thought I was starting to feel normal but then the heat or effort sunk back in and I was back to the same slow motion mode. On the way back into the festival village, I looked back a few times but didn't see anyone. Maybe the heat was slowing everyone else down as well. I rolled into the finish line at a surprizing 7:11 pace in 3rd place. Jay and Kevin finish 1-2 as I faded to 3 minutes back in 1:20:45

This was my shortest, but hardest race of the season. It was a bit stressfull for me but it's nice to know that hard work makes for a good race. Just showing up and hoping for the best is as hard as it SHOULD be. There is no such thing as a free lunch. Luckily, I had a bit of fitness left over and was able to pull out a good finish. Nice race for its inaugeral year. I'll be back. 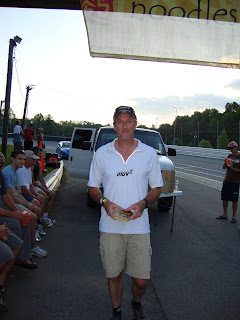