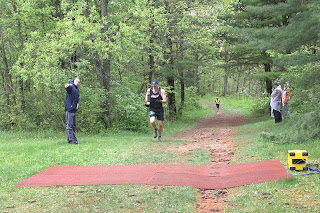 I must not have had enough Winter. One week out from the hottest race day of my season and I was already headed North in search of snow. Well, not really but that's how it played out at last weekend's Ice Age Trail 50 in Wisconsin's Southern Kettle Moraine Forest.

Once again Mark Lundblad and I teamed up, this time heading north to hit the roller coaster historic Ice Age trail system that makes up most of this 50 mile and 50k race. We showed up on site Friday morning to find a balmy 50 deg and rain. No problem because it was supposed to pass in the night and leave us with dry cool conditions for raceday. Perfect ultra weather. We drove around a bit looking at all the road crossings and getting familar with the trail system. Mark had run this race in the past and I had run a few miles on it as well while watching him take the win in 2007 but we were really just waiting for it to stop raining so we could stretch our legs. After a couple of hours, we gave up and ran a few miles to get the blood flowing. Surprisingly, the trails really handled the water well and were in great shape. Back at the hotel, the weathermen were still lying to us. Clearing and cool, Rain ending by morning......

Though the venue held both races, the 50 milers started at 6am and the 50k "Fun Run" folks got to sleep in and start at 8:00. Since Mark was in the former and me the latter, and only one car, I got to experience the early morning event as well. Waking up, it was pretty obvious that the weather had not changed. Except maybe to make it even colder, windier (now 30 mph) and threaten us with SNOW. It was snowing north of the race and felt like it could here at any moment. We debated what clothes to wear as we sipped our coffee with the car pumping out heat and decided that the trails were mostly wooded and offered a break from the wind. We would both go with singlets and gloves. This turned out to be a great call.

The 50 milers started off with a little spitting rain and gusty winds. Not too bad for running but standing around for two hours was going to be chilly. Mark's race did a 9 mile Nordic Loop back to the Start/Finish before heading off on the Ice Age Trails for the remainder of the day, so I waited for his return to pass off a bottle before hiding back in the car. There were a lot of racers milling about now and the hype energy was building. I couldn't do the car thing any more so I started running circles in the parking lot. For once in a blue moon, my legs felt great. Maybe my taper had worked this time. Getting to the hotel at 2am (airplane issues) the previous night kind of screwed up the sleep but I couldn't wait to get going.

My race consisted of an out and back on the northern IA trail system before returning to the Start/Finish area. From there, we did two 9 mile loops of the Nordic XC Ski trail. I thought I had a pretty good plan for the race. 55 minutes out, 55 back. 1:15 kind of easy first loop to see how the terrain felt then hammer the last loop at 1:10. Put my finish time about 4:20. That's all fine and good but I really had no idea what the trails were like. The website said that the 50 mile had 12,000 ft of gain! I questioned that and the response was that that was a typo. 6800 ft was correct. I guessed about 4500' for the 50k. Now if anyone has ever been to Southern Wisconsin, it looks an aweful lot like Northern Illinois. Lots of farms and very flat. Those kind of elevations seemed big to me. I had heard that there were lots and lots of little nasty hills that crept up on you and eventually wore you down like a bad set of tires but 4500' seemed a little generous for the landscape. Something wasn't right.

The race went off without a hitch. I hooked up with a good crew of runners that were pushing me hard. As usual, we were all going too fast and beyond our plans but its race day baby. Go with it, right? The course was beautiful. Pine forest single track, smooth grassy double track and wildflowers foolishly starting to bloom. The weather stunk but I could hardly feel it as the forest protected us from most of the wind. My first 13.2 miles sailed by in 1:41. While I felt very prepared for the race, training, taper and race plan, etc. I made a near fatal error. I had been experimenting with fuel, eletrolytes and ibuprophen. I had my needs down very well. Everything was going to be great as long as I stuck by my dosing schedule. My flaw was a hole in the baggy. At hour 1, I pulled out my electrolytes only to see them scatter all over the forest floor. I had a hole in the bottom of a brand new bag. Uggggh! Since they were white, I was able to collect a few of them but not all. My IB's were gone. I only take two but they were gone. I had a couple of extra of everything but was only able to save one IB. It was now wet and fading fast. I stuffed what I could salvage back into the worthless bag and carried on. I ate all the dirt covered pills I had left but really wanted the IB by the 3 hr mark. I desparately licked the dust out of the bag in a faint hope that it might somehow take away the ITB pain in my hip. I wont do that again. Yuk.
By the time I made it back to the start/finish, I was my usual sweaty mess. Grabbing a fresh bottle, I took off for the first of two 9.2 mile loops. I was still with my running mate, a new aquaintance, Thom (sorry don't remember your last name), but at the next aid station, he dropped back to refuel and I never saw him again. I cought up with a couple of other guys that I had been chasing all morning and ran with them for awhile. Again, they were pushing me pretty hard but I needed it as I was beginning to feel the race. Then the hills hit.

It was described to me by my brother why they call this the Kettle Moraine. The 'kettles' were the endless 20-80 foot dips in the earth. They were steep and plentiful. This trail seemed to find all of them. Nothing very long at all. Just crest over the hill and drop straight back down and back up again. One after the other. Incredible. Now, there were hills right from the start, they were steep little stingers as well but I (and everyone else) had fresh legs. These just seemed to rattle my body going down and fill my shoes with concrete on the way up.

You can see from the profile, there were very few flat spots. The graph shows a downward trend but that was from the cold front moving through and rising pressure. Anyway, once these kettles started coming, my running group was shattered. My companions, smartly, started power walking the hills but I decided this was the place to go. I kept running. They hurt and I was probably running at walking speed but I kept the motion going and soon gapped everyone in my sight. Now running on my own with no pace reference and not knowing how far I was to the end, I started to lose faith and slowed a bit. Once I made it back to the start/finish for my second loop, I knew what was ahead and felt like I gained a little spark in my stride. It might have helped that I started lapping a lot of the other runners. They all had such great energy even though they would most likely be out on the course for several hours more than me. It really gave me a lift to run with them, even for a short time.
Although, I was 3 minutes slower on my second loop, I passed the marathon point under 3:30, felt great and finished with a strong surge to cross the line at 4:14. This turned out to be a PR and put me in 5th place overall. As for my race plan, I was 10 minutes fast in the first half and 5 minutes slower than expected in the second half. I didn't negative split anything but I came away very happy with the outcome. Just for the record, no way did this have the elevation they were claiming. It must have been done on a GPS because they don't really do elevation well. My Suunto watch recorded an even 2700'. Even with the changing pressure it was more likely no more than 3000'. Mark recorded just over 4000' for the 50 miler. Regardless, these hills did have a bite. Even though I live and train in the mountains, doing hill repeats at the end of a 50k is rough.

Still rainy, windy and cold. I waited just a few minutes for Mark to finish his 50 miles and watched him cross the line for a super strong 3rd place. As we got warm and began to consume the great post race beer and brats, the sun finally arrived. Then the snow came. Burrrrrr. We headed back to the airport and hopefully a warmer southern climate.

This was a very well run race from first time RD, Jeff Mallach. Volunteers were awesome and the Wisconsin folks are some of the most hospitable around. I hope to come back next year and do it again, without the cold. I chose to run for the first time in the Inov-8 X-Talon 212's. These are their lightest trail shoe and were somewhat of a gamble for my old, 4-knee surgery legs. But they turned out to be superstars. I absolutely loved them and had no issues at all. Perfect for this somewhat soft and less technical ultra. 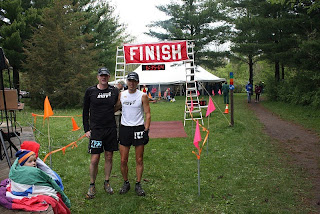