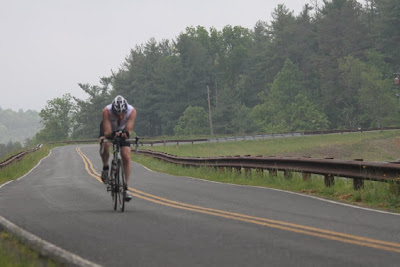 My big race for the month is the Ice Age 50k, May 8th, up in Wisconsin. So, since it was only a week away, I thought I should kill myself just one more time by racing 6 days out. Bad idea? Maybe but it was pretty fun. In reality, Mark Lundblad, (he's going with me to Wisconsin to do the 50 miler), and I had planned on doing a 5k on Saturday just as one last short effort to get some good leg turnover before our ultras. Unfortunately, my plan to do the Highland Lake 5k was stupid. Its about a 4hr round trip. Duh. So Mark, the smart guy that he is, remembered that the May Day Biathlon was on Sunday. It has a 5k race and a 5k run - 30k bike biathlon, Mark's company was one of the sponsors so he got a comp'd entry and it was only a 45min drive. All good and a no-brainer. To top it off, they were offering $$ to the top 5 in each race and top masters. Sweet.
The conditions race morning were HUMID and hot. Don't know where this came from but it was a shocker to my system. My little ten minute warmup left me dripping with sweat. I decided to go with the Inov-8 f-lite 301s. A little heavy maybe but the tread was good for the road and I really have nothing else but trail shoes. When Mark pulled out his sweet looking f-lite 220s, I have to admit that I had a little shoe envy going on. Need to work on that.
Mark was doing the 5k and since both races started at the same time, we lined up together. I'm not sure when his last 5k race was but mine was years ago. His goal was to go sub 17 min. Mine was to go 19 flat. or 6:15 pace, whichever comes first. You do the math, something doesn't add up. All the engineering school knowledge flushed right down the drain. Anyway, overall, I was looking for a finish under 1:15.
Since both races started together and ran the same course, I really had no idea who I was competing against. When the gun went off, the pack spread out fairly quick. Mark and the lead dogs were gone but I still had a group around me that were making me hurt. Still not sure who was doing the Biathlon, I tried to stay with the pack that was in my reach. My first mile was 5:50, oops. Not sustainable. Second went at 6:10, OK, maybe but still a bit too fast. So much for running negative splits. By the last mile, I was paying for that quick start and slowed down quite a bit. But, I clocked into the bike transition at 19:25 for a 5k PR and right at 6:15 pace. Awesome! A great result for me but still left me in 11th place to start the 30k bike leg.
NO DRAFTING
The bike ride took us on a very pretty course that had about 1100' of elevation gain in 20 miles. I would call it moderately hard as far as road multi-sport goes. I passed a couple folks right out of the transition area but, still wheezing from the run, reeling in the rest would take me the whole race. In the rules, and mentioned twice right before the start of the race, the no drafting law was spelled out pretty clearly. There must have been some non-English speakers in the race because I was trailing a group of 3 that were clearly working together for a large chunk of the bike. It really started to get into my head as I just couldn't seem to gain any ground on them. Then the hills really took over about mile 10. Drafting doesn't work as well there. I stomped on the pedals and quickly passed, then gapped them. I had thought about what I would say when I caught up but in the end the best words were simply just action. I dropped them on the climb and never looked back. Yeah, its a petty thing but its not how the game is played. It is such and energy savings to ride with a group than to hit it solo. If I had to do another run after the bike I might have paid for my effort but this time at least, I could go all out on the bike.
Luckily, I was able to pass most racers in my way but had two pass me (I wont mention that they could have been my children). Did I just write that out loud? Sorry.... I crossed the finish line in 5th place and in the money, 1:14:56, just under my goal time. Overall a pretty good race and I was happy with the result for something that I had no plans of attending. Mark, BTW, changed his strategy mid way through his race and went for the win instead of the time. He ended up hanging back a bit and out kicking everyone for the win in 17:02. Experience does have its rewards!
This was the first time this spring for me racing in the humidity, so it was a bit oppressive feeling. It always takes its toll getting the body used to its new environment.
The f-lites turned out to be a good choice. I don't run on the road very much but I had the same great feel and comfort that I am used to with all the Inov-8 models.
Posted by Dwight at 10:12 AM