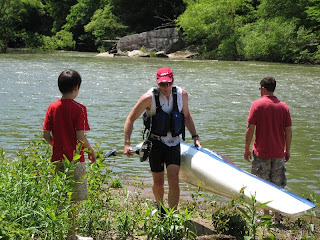 Another week in May and another race. This time up in Wild and Wonderfull West Virginia. After racing 3 of the last 4 weeks, including the 50k last weekend, I was feeling a bit tweaked. But I just can't pass up a 'kayaking' triathlon. I spotted this Elk River Challenge a couple of weeks ago and quickly threw it on the schedule as a 'must do' event. My race week preparations were pretty lame. A good river paddle, followed by a very tired 3 mile run. Another tired treadmill run at 10min pace and a silly way too hard road bike ride. Needless to say, I didn't have a great deal of confidence in the body mechanics or performance energy going into the weekend.


Dispite not having a threat of snow this weekend, the weather gods were not happy. Strong thunderstorms crashed down all night and were possible the following day as well. This was good news for the boating leg of the race but not for the ride. The race was advertised as a 5 mile paddle, 15 mile road ride and 3 mile run. It was to start at the Clay County High School and follow the Elk River the entire way. On the drive up to Clay from Fayetteville, I knew it would be pretty. The morning brought dry conditions and an absolutely glorious blue sky day. I had never been to this part of West Virginia and I kept asking myself why? It is nestled in the deep valleys formed by the New and the Gauley Rivers. No hotels, stop lights or cell coverage but a very beautiful Elk river.

I arrived on site to find a very friendly race director and staff. They quickly gave me the low down on logistics. We needed to drive a few miles down the river to drop our bikes in some guy's yard that he was nice enough to lend us for the river takeout. We start in our boats from the School (Start/Finish line) in waves, hop on our bikes for a scenic 15 mile country road ride and make our way back to the School. Grab the running shoes and do an out and back to the small town of Clay (making sure you go around the water fountain just after the Rite-Aid) and finish back at the School. Driving down to the bike drop, I realized I may have made a mistake bringing carbon wheels to this one. The road was very rough and loaded with killer pot holes. Topping that off was the plethora of wild dogs and this was NOT looking like a ride you wanted to spend a lot of time in the aero bars. You were going to need a long view and a quick brake hand. 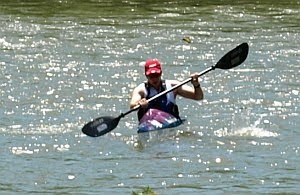 The Male Open wave started first. I felt a little bad bringing my Ruahine Firebolt to this one. It was the perfect boat for the race but it was a bit of an overkill for the other racers. There was only one other 'racing' style boat and the operator was still trying to figure out the skill set to keep it upright. Needless to say, I started off with a big advantage. The boat leg was extra gorgeous. I really enjoyed the paddle and with the high water level, made quick work of the 5 mile sprint down the river. No rocks, no problems. There were more nice folks at the river takeout waving their arms to make sure I didn't miss it. The takeout was a nice sandy beach with an easy grade up to the road.

I was the first out of the water but I had no idea how big my lead was. The bike would travel 5 miles down stream then turn around back to the boat take out, then back to the school. I would be able to see the competition on the way back and do a time check. Doing just that, I passed the 2nd place guy with about a 6 min lead, 8 miles into the ride. I had thought I would have had a bigger lead but he must have been a strong paddler and/or my legs were still shattered from last weekend. He could have been a real strong biker as well so I pushed the pace to keep it difficult to catch me. Passing back through the boating takeout area, a truck pulled right out in front of me, completely blocking the road. If I was on my TT bike it would have been all over. Instead, I was able to grab the brakes and lock up both wheels to avoid the collision. This gave me a pretty good fright. Still shaken from that encounter, I was soon greeted by a pack of 3 dogs looking for a fight. Usually, I don't take shit from dogs. I will get off my bike and attack them! In a race situation, not so much. They seemed to work well together, one trying to cut me off, the other going for my ankle, then one stopped right in front of me. I yelled at them to GO HOME. They must know that one. It worked. Ha. The rest of the bike was smooth and I cruised into the School parking lot, still in first place. Hopped off the bike and threw on the RocLite 295's for the last leg into town. 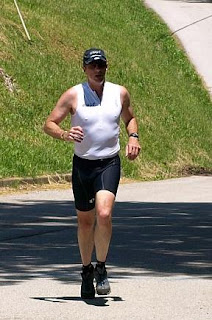 Now I've mentioned before that I really don't run the road very much. In fact, I really don't have any road shoes. The 295's are about as aggressive as they come for the trails. But, they are still very light and they were setup with elastic laces so I brought them along. They must not be too bad as I was still able to run a sub 6:30 pace for the hot pounding leg into town and back. I had checked out the course before the race and never saw the fountain they were talking about. On my run into town, I kept thinking this was the only thing that could screw me up. Getting lost in a no stop light town. Nice. I can see it now. As I made my way out from the school, I asked the RD one more time if I would know where this fountain was. Yes was the answer. Right after the Rite-Aid. OK.

The run seemed endless for such a short course. It was along a 55 mph, 2 lane highway, mostly in the 2pm sun. I did indeed find the fountain but there was nobody there to make sure I went AROUND it. I must have out run the volunteers. Maybe they were sipping a cold beer in the shade (as this was the exact thing I wanted to do right then). Whatever, I did as I was told and cranked on back to the finish just as the 2nd place guy was leaving on his run. My run was modestly fast but not great. I must have put the hammer down on the bike as I won by over 15 minutes. I finished in 1:35:25.

The post race food and awards were very casual and laid back. More very nice folks and good easy conversation. It was a long haul to drive up to this venue but I really enjoyed the change of scenery and the challenge. Since this was a new course this year, I not only came away with the winning prize money but with the course record as well. It might not last long but its the only CR I've ever held and its mine for at least a year. I'll take it. 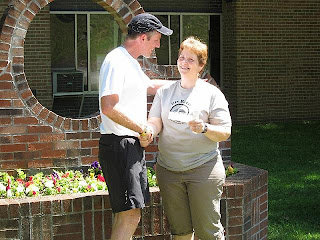