Devil went down to Georgia 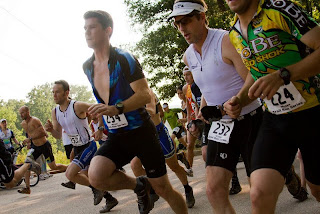 Yes he did folks....and brought his hell fire weather with him. I hadn't raced in a while so I thought I might take on a quickie race down in Gainesville, Ga over the weekend. Chicopee Woods Offroad Duathlon. It was a 3 mile run, 9 mile ride and 3 mile run on the SORBA built trails of Chicopee Woods.

I had a pretty good build up to this one. Did a few very good workouts and was embracing the Southeastern Heat wave that was hovering over Western North Carolina. I felt in fairly good shape. Even thought the weather forecast was calling for temps in the 90's and high humidity, I thought it was short enough that I could 'weather' the storm, so to speak. Bad pun and bad idea.

Trying to save a few bucks I figured I would drive down late at night, find a place to park and sleep in the car. No problem on the driving and parking but the temps were still in the 80's with no breeze. It was a sweltering night of 'rest' stuffed in the car. Still, I didn't feel all that bad in the morning and I was right at the start area so it was all good. I found a quickie mart nearby for a cup of coffee, checked in and started to set things up.

I met lots of old friends there and since it was the last of the Georgia Offroad Duathlon race series, lots of fast racers showed up as well. I did a good bike and run warm up before the start and felt the humidity quickly suck the life out of my legs. I was already having a hard time staying cool.

We had a 200 meter road run to get to the single track. When the race started, my plan was to go for the hole shot and stay in the front of the group. There were quite a few racers lined up and I didn't want to have to deal with passing folks right away. At the gun, I went out at my customary Way Too Fast pace and tried to hang with the lead group. This race also had relay racers and I wasn't sure who was going solo so I tried hang. I made it to the single track in 5th or 6th place but the lead 4 guys were sub 6min pace at that point. No way was I going to make that work so I pulled back and let them go. By the time I made it out of the forest and back to the bike transition, I was right where I wanted to be position wise and felt like I was the stronger runner among my peers but I was already in the red zone. Sirens were going off in my head telling me of pending doom. I tried to ignore it as I was in prime position to hit the bike. I just needed to get on the bike and cool down a bit. 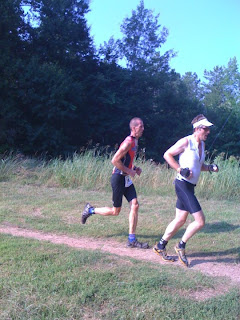 I poured a bottle of water on my head before hopping on the bike but it just felt like a heat shower. The single track turned out to be a lot of fun. I tried to kick out the pace and catch up to the lead group but soon had a few folks pass me signaling my pending bonk. I was fading fast and just had no power in the pistons. I was overheating bad now and made it out of the trail system several minutes back.

Again, I did my best to do a fast transition but as soon as I started back on the pavement route to the running loop, I knew right then it was over. I was smoked. I thought maybe I would cool down a bit if I just took it easy but soon I was starting to feel dizzy and my breathing was labored. I began to walk at the first hill. Its over. I managed only a 11-12 minute pace for the last run leg and limped in several minutes back and way out of the game. My only saving grace was that I didn't DNF. I thought about it about 1/2 mile into the final run. I knew from past experience it as over and possibly I was in serious trouble. I was in the heat exhaustion phase and could have easily stroked out. 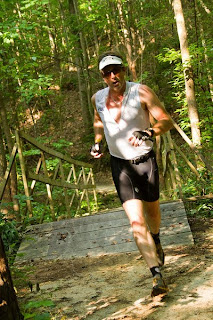 When I got back to the finish, I poured as much water over my head as possible. Drank several cups of Gatorade and water but was still having trouble breathing. I needed out of the heat so I packed everything up as quick as possible and hopped in the car for the maximum AC experience. I don't normally leave a race before the awards because I think its just bad sportsmanship, but I did this time. I needed away from this Devil palace.
I have had heat melt downs before. In fact, I have never had a good race in the heat...EVER. For some reason, I can't seem to learn that lesson. My body just can't process the heat and I have no mechanism to cool my body in the high humidity. I just need to choose my battles a little more carefully.
Posted by Dwight at 9:19 PM