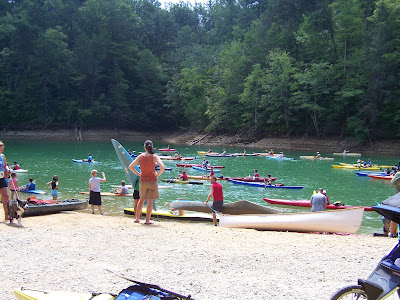 I love this race. Its one I look forward to every year. Maybe because it is one I do very well at. Maybe because it is one of the first multi-sport races I ever entered. Or, it could be because, in my circle, it allows the winner bragging rights for the whole year. This is one of the oldest, at least that I know about, kayaking offroad triathlons in the country. The venue puts it smack dab in the heart of the US Olympic Kayaking neighborhood (Nantahala Outdoor Center and Rhino Racing Club) and home to a smorgasborg of outdoor studs and otherwise very fit and active people. The US Whitewater Center has officially moved to Charlotte NC but there is still an Old School crowd and heritage that comes with this event. Put that in with an absolutely beautiful venue and this becomes and instant "A" race for my season. 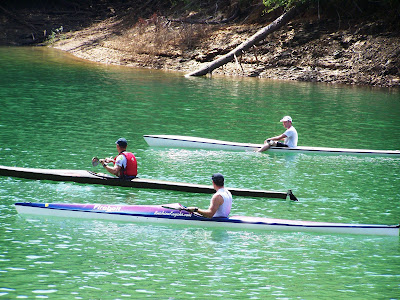 The race venue is at Tsali Recreation Area. Its single track trail system follows the fingers of a resovoir boardering the Smokey Mountain National Park. The race consists of a 4 mile flat water kayak, 5 mile trail run and 15 mile mountain bike. The kayaking start is too small of an area to accomodate all the racers at one time so there are two identical races on the day. One in the morning for the Masters men and all women and one in the afternoon for the open men. In the past, since I am truly of Master material, I have always opted for the morning race. Being the same course, I could always rate myself against everyone even though I wasn't racing head-to-head. The other bonus was that is was in the cool morning temps. I have a major battle with the summer heat and any time I can put out an effort away from the heat, it is a no brainer. I have done the morning races several times. I have waited around in the heat to watch the afternoon guys as well. I have won the morning race and indeed had the course record coming into this year but there was always something in the back of my mind that told me that it was really not apples and apples to compare the two races. The heat KILLS me. It has to hurt everyone else as well. So, this year, I decided to do the afternoon race and see how the old man does against the young boys. 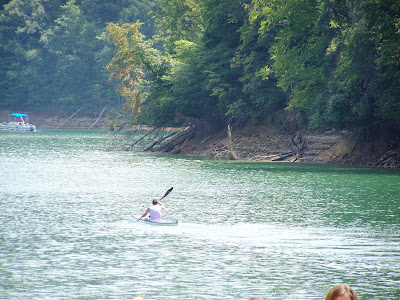 One of the beautiful features of this race is that the kayak leg is handicapped. It starts out in waves with the slowest boats going first followed every minute by the next wave of faster boats totalling 7 differnt waves. The bottom line is that you don't have to have the most expensive boat to win the race. While these times are a bit subjective, the race has over 15 years of experience along with the National Whiterwater Team Manager's rating system (actually very scientific based on boat length and hull design) and is the best way possible to make for a fair start. Of course, I have my own super fast boat for these type of races, but all that means is that I start last, giving the first guys a seven minute head start. 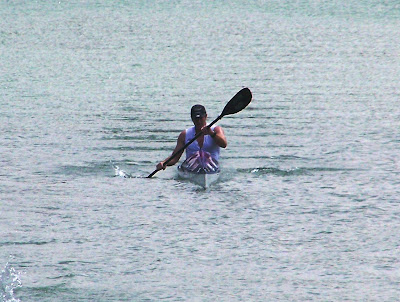 I made it to the race in time to see the finish of the morning race. As per script, it was nice and cool. By the time my race started at 1pm, the sun was nice and high and the heat was brutal. Starting out in the kayak was uneventful. I had just 4 or 5 other boats in my wave and clear water. It took me about 3 miles to catch all the boats in front of me with the exception of one or two and a couple in my wave. The leg is an out and back section and I exited the water in about 7th or 8th position. 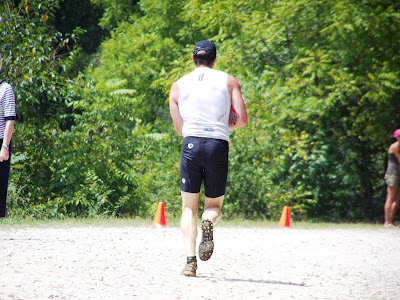 A quick transition to the run and I was off for the hot run up the gravel road to the trail system. Along the way I grabbed a water bottle as there are no aid stations. I was already overheating so this was a good move. This section has a 1 mile exposed uphill gravel road to negotiate before hitting the mostly shadded trail system. Its really easy to blow it right here. You need to keep the adranaline in check and get the blood flowing from the arms to the legs in the section before letting loose. I know this section well and kept cool passing one or two but at a manageable pace. On the trails, I pushed as cruised. I really played it by feel and backed off whenever I felt overextended. There is a very nice mix of hills and rollers and I caught a couple of others early on and was mostly on my own for the meat of the run. I was really feeling the heat now and wondering if I could pull this off. I finished my bottle but still no end in sight. 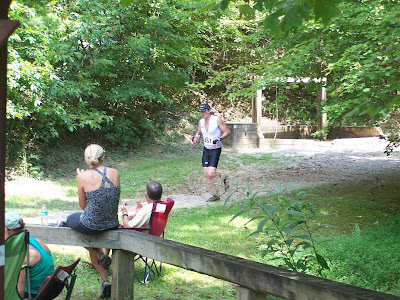 As I entered the transition area to the bike, I was really questioning what I had left in the body. Not so much my endurance but the heat I can take. I have a history of meltdowns and I was feeling horrible at the moment. Mostly, I needed some water. Luckily, I had a fresh bottle on the bike and took a long draw off of it before heading out on the bike leg. I was now in third place but still a few minutes back. I needed a good effort here to take the tape. 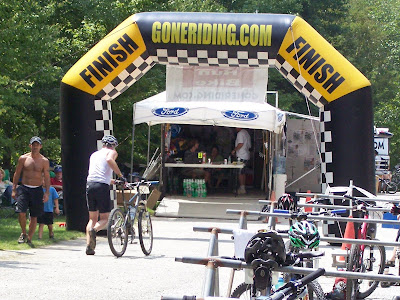 As I made my way out of the transition area, I tried to regroup and focus on the task at hand. I had to believe that all the heat was effecting the other guys as well. If not, well, then they were just better today. Either way, I was not going to give up. Never give up.

I quickly got into a good pace I could maintain to get my body switched over from runner to biker. It was another long uphill gravel road to the trail system and I just put my head down and focused. Surprisingly, I found the two guys in front of me in the first 3 miles. They were indeed struggling. Maybe from heat or maybe from effort. I kept pushing hard and dropped them on a steep climb. I didn't go into the red to do it. I just kept a very hard pace. If they could hang, then good for them. If not, then I break their spirit quickly and settle into a hard drive to the end. The latter was the game at the moment but, again, I ran out of water.

The bike leg was advertised as 13 miles long. I was near the end of that length but still not near the end that I remembered. I had the usual and horrible thoughts that I took a wrong turn and was now off course. This slowed me down a bunch as you just don't have the same drive if you think you are racing hard in the WRONG direction. Indeed that was how I felt. Now at 14 miles according to my odometer, I was very worried. I had to keep telling myself that I didn't see any other turns or signs. This was the correct way. Soon, I came to a trail intersection where the run had come into the course. I now knew that I was indeed on course. Still out of water I hammered as hard as I could to the end. 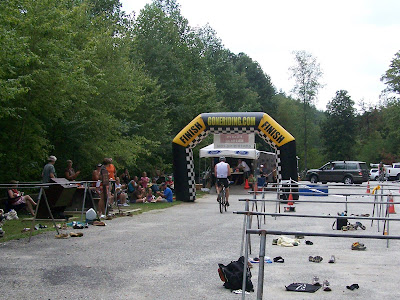 I crossed the line in first place with a new course record! Bettering my time from last year by a few minutes. First things first. Get some water! I was smoked. Feeling good to be finished but really bonking. 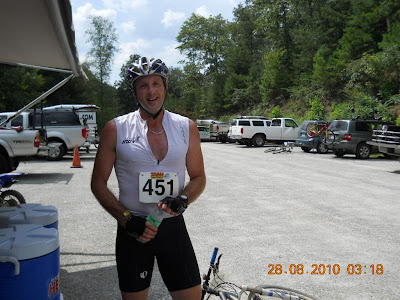 I'm glad I did this afternood race. It is truly not the same to race in the morning. As much as I like racing against an open group (not masters or whatever) the heat just makes for a more unpleasant experience for me. I think I will drop back to the old guys group next year....or maybe not. This felt pretty sweet on the top step. 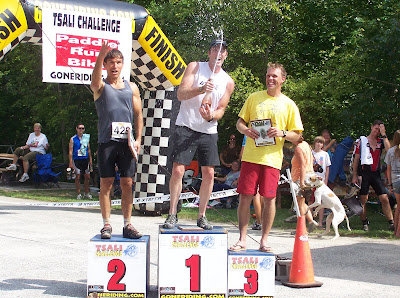