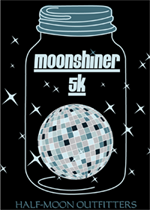 I have to give some props toward this race. I'm not a big 5K fan but when I first saw this it popped out at me as a must do. I'm actually not sure I have ever done a 5K on trails. This one was not only on trails but at night and sounded like a lot of fun. Some other bonus': It was just a short drive down the mountain in Greenville, SC and it was on Friday night. I would still have the whole weekend to do what people do on weekends. Yardwork!

I saw this race advertised on my new favorite medium, Facebook. A Greenville friend of mine, Jeff, was going and I thought it would be a good reason to come down there and share an after race beer or two. I used to live in Greenville, but that was back in my fat-boy days. The race venue was Paris Mountain State Park, a place I had seen on the map but never actually ventured in. I arrived at Jeff's downtown house in time to car pool to the start. Apparently, the race had sold out and parking was going to be tight. Jeff, immediately hyped me up and told me it would be a pretty easy course (for me) and I would probably win. Nice. I don't think I have ever won any running race, and my 46 yr old legs really don't have the turnover speed to be anywhere near the front of the pack. Nevertheless, it sounded like a good plan so I got ready and scooted off for a long warmup. 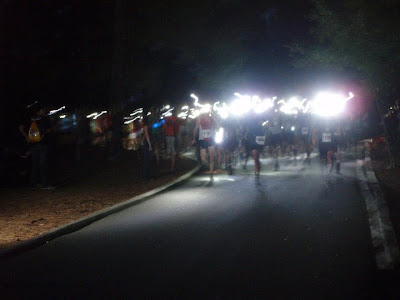 By the time I got back from my warmup, the crowd of 300+ had gathered at the start. The sun had set a while back and it was now indeed dark. We listened to a few instructions from the race director and switched on the headlamps in prep for the rush to the trails. I have to say, it was pretty cool getting ready to run on trails that I had never seen in the total darkness. It made for an extra adrenaline boost anticipating the unknown. I have done a lot of nighttime adventure racing but never a trail race at 5K speeds. This was gonna be fun.

The race started off very typical for me. In the front and way too fast. I had been told that it was a short section of pavement before hitting the single track and I wanted to make sure I was near the front before that transition. It turned out that we had almost 1 mile of pavement (up hill) to the trails. Not knowing how far it was, I pushed pretty hard and hit the trail in first place. At this point, I was pretty pleased. I know I went too hard but I felt a bit recovered once it leveled out and I could see no lights behind me. Somehow, I faked everyone out into letting me go. Maybe they forgot about me and weren't even going to chase. Either way, I settled back into a solid pace for the last two miles.

Eventually, my fitness ran out, (as it should have). I started to see shadows in front of me signaling that there was now someone on my tail. At the same time, my trusty headlamp started flashing signaling that the battery was dying. Nice. I thought it would make it another 20 minutes but apparently not. I had to lower the setting on it (basically to low beam) making it tougher to see the trail footing. New Plan: Let the guy behind me get in front and I use his light to get me through the trails then take him at the end! Plan B, Part 1 worked fine. Problem was, he dropped me as soon as he got in front. I just couldn't hang. Then the next youngun' came along. Same thing. Passed right on by but this time I could actually hang. We both came out of the trail system together and back onto the pavement. I could hear the finish line but I couldn't see it. We took a hard right turn and up a steep driveway. I could now see the finish but it was too late to put on the kick. I made up a little time but finished a couple seconds back in 3rd place. 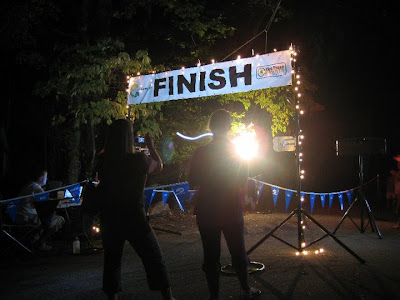 This was a very cool race. A great break from the usual hot and boring road 5K. Halfmoon Outfitters layed out a well marked course, good eats and swag at the end and turned out a big crowd for this inaugural event. Entries will again be limited next year so be on the lookout. Very highly recommended.
Posted by Dwight at 4:41 PM