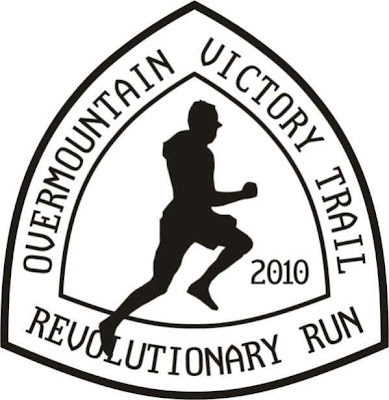 Wow! Where did this one come from? Part of the Blue Ridge Cup Series, the Overmountain Victory Trail (OVT) 25K was in my sites as another race to gain valuable series points and sort of round out the long racing season. There was some mounting competition in the series and I was looking to secure my place on the podium. It turns out the the top two competitors in the series were also at the race so I was a good thing I made the trip.

I have biked on this course in the past. If fact I won an offroad triathlon here the previous year. This Summer, I camped here and actually ran this whole course a couple of times not knowing that I would return to race in the fall. After having one of my best race efforts ever, just two weeks earlier, I thought my season was over and really had no intention of doing anything else. But when I found out there was a race on these spectacular trails, it was a no-brainer.

The venue is located at the Kerr Scott Reservoir near North Wilkesboro, NC. There are about 40 miles of fantastic running and bike trails, well maintained by the Brushy Mountain Cyclist Club, and a spectacular lake and campground area that just welcomes a hot summer family getaway. The morning met us with low 40 deg and foggy weather and a full group of runners for this inaugeral event. As well as the 25K, there was a 10K option that raced concurantly so it was exciting to break from the start no knowing who was doing which course. 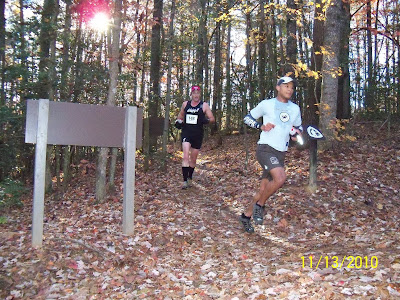 I had no game plan for this one. I knew the course so that was no mystery. I just didn't know what I wanted to do. My sole motivation was the Blue Ridge Cup Series. I just needed to stay with the points leaders. I tried to start out slow (always my first choice) but it didn't last long. There were a few guys that took off and I just didn't feel like I could let them go. This was a strange distance for me. 25K should be what pace?!?. Who knows? So, how long do you wait before you go after the lead group? For me, it was about 1 mile. I took off and pulled a few with me. We chatted a bit in my chase group but I was really trying to focus. I tried to get them to cooperate and work together to grab the two in front of us. Nobody was playing so I pushed off on my own.

A short time later, I caught up with #2 and worked with him for a couple of miles. I didn't want to take off as I was a little spent from the effort to catch up but he seemed content to hold his pace so I bolted from him as well. Now in 2nd, I was somewhat content. I kept my hard pace and soon found myself right behind #1. When I caught him, Abran Moore, I asked if he was willing to work together to build a lead on the others. Abran was a player and he was ready to move. He was looking strong and experienced so I was reluctant to pull ahead but I thought since it was my idea that I would jump around to the lead and pull for awhile. Abran was OK with that and off we went. I pulled until about 1/2 mile to the turnaround when he offered to take his turn at the pull. I was feeling the race at that moment so I let him go.

We were right on top of each other at the turn and I was struggling to hang with him after just the next mile. I took a gel and tried to recover but was now a bit sick to my stomach. Never being one to play the part of the "leach", I offered to pull a bit. I told Abran that I didn't want to slow him down but I would do what I could to work the rest of the field. He pulled over without hesitation and I grabbed the lead. To my surprise, I started to drop him. We came to a somewhat long hill and I put about 10 seconds on him. It was way too early to put on the push to the finish but I was forced into a move and I took it. If I was going to shake him, it had to be now.

The course was relentless. There was no flats. Many of the hills were 8-10 footers. Not too hard but it was very difficult to hold a pace. You were constantly accelerating and decelerating. I did my best to end the race about 5 miles out. I was feeling a bit better a short time after gapping Abran but soon hit a bad energy zone in some of the remaining hill challenges. The trail had many switchbacks that offered a view of anyone trying to sneak up from behind. On one of those sections, I caught Abran just a few seconds back. I really thought it was over at that point as I was on E. 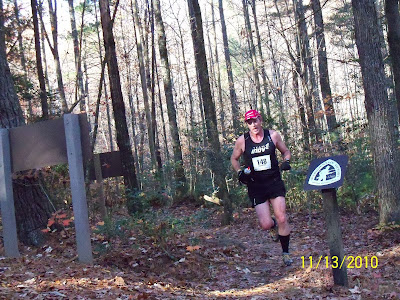 Abran's effort to bridge back up to me must have been too much. At the top of the next hill, I put in my final kick to the end and put another 30-40 seconds on him. Very surprisingly, I finished in first place!! and secured the overall win in the Blue Ridge Cup Series. I am very proud of this race. It was my first ever trail race win and one where I went through several tough moments of doubt. In the end, the ever present motto of every distance runner came true. "Never give up, EVER" 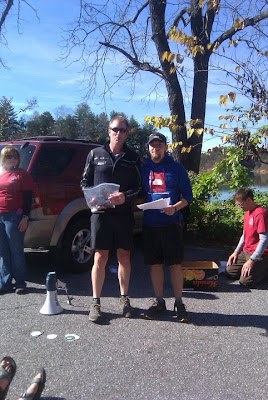 This was a first time event and a very highly recommended. You will not find better running trails in the beautiful NC mountains.
Posted by Dwight at 10:12 PM